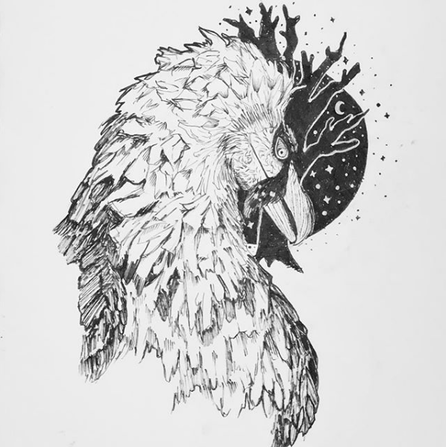 The waxing first quarter moon is in Cancer, moving past her square to the sun in Aries and an opposition to Pluto in Capricorn.  A mirror among orbital dances, the moon is known to trigger and disperse the energies of planetary aspects in this solar system.  Moon-Pluto contacts evoke deep emotional processing, plain-as-day reflections on ancestral karma and power dynamics both healthy and diseased within one’s present home.  This is only enhanced by the moon’s conjunction with its North Node degree point and Pluto’s conjunction with the South Node.

​Quick recap of new-moon-and-onward curiosities.  Several days ago, not long after this lunar cycle began, the sun in Aries approached a now-fading square to Saturn in Capricorn: A car on a Pittsburgh highway engulfed in flames is extinguished by its former passengers, causing quite the traffic jam.  The Aries-Capricorn square is like a gridlock, the yes-no, a fairy caught between gas and brake pedals.  The planetary rulers of these signs, Mars and Saturn respectively, are the unstoppable force and immovable object.  Aries rules the head, whereas Saturn and Capricorn are associated with the knees, bones and teeth.  Without thinking about it, I scheduled dental surgery on that day.

As the moon moved through Taurus and into Gemini, it made contact with Mars in Gemini, whose tenure in the sign of the Twins stretches until May 15th.  The utility of language, the conversational quick quip, and a flirtatious if not flighty nature all characterize Gemini placements.  Combined with our current Aries Sun, these energies exude a playfulness in April’s first few weeks, with the fun-loving yet healthy detachment Gemini placements.  Fellowship amongst each other can be both medicine and frivolity, so our restless tendencies must be held in tandem with the hard efforts begged by the Sun-Saturn square from Aries to Capricorn.  (The astrologer Adam Elenbaas rather eloquently described this dance between drive and dream in one of his horoscopes a few days ago.) Okay, enough recap.

Venus, still in its exaltation Pisces, emphasizes a sensitivity to art, music and each other — supported in ways by the healthy detachment the sky’s Gemini placements bring.  The urge to merge can be strong, but sometimes we must do what is in our best interest.  These are ‘mutable,’ changeable signs.  Our egos may serve the preservation of our hearts in contemplating the illusion of permanence, a veil upon fleeting, mercurial realities, the growth and decay, the rearrangement, the fading away of our works, lovers, lives.  Yet giving freely to others, with presence of the heart, brings us to what fruition our moments are meant to see.  It is always in our best interest to act in service, something I constantly remind myself in the midst of my Sade Sati — Saturn’s transit across the sign prior to, the sign of, and the sign following one’s birth moon.

A piece of Gemini’s highest nature is the ability to weigh things and see multiple contradictory truths, which can yield healthy perspectives if not unsureness and mental anguish.  Uniting air and water, thoughtful word with open-hearted listening, is the process.  With the moon and Jupiter both in their home signs, the promise of opportunity is large; with Mars in Gemini the reality of many paths strong.  With Mars opposing Jupiter in Sagittarius by sign, degree in coming weeks, we may reflect also on the nature of multiplicity versus singularity, of the many and the one, of separation and togetherness, of irreverence and devotion.