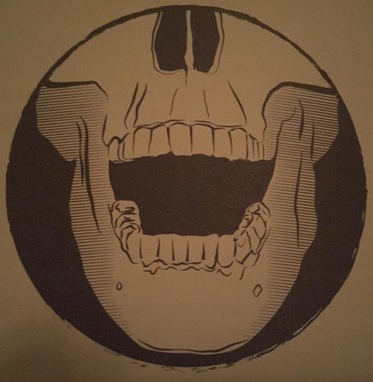 Happy Devil’s Night!  The Sun is in Scorpio, verging on the beginning of the sign’s second decan — called “Pleasure” in both Book T and The Book of Thoth.  However, it is still in the first decan, called “A Jawbone” by Austin Coppock.  “Hunger awakens.  Needs stir and then open a hundred eyes.”

The Moon is toward the end of Gemini, at a trine to Mercury in Libra while squaring the stellium of Venus, Mars and Jupiter in Virgo.  I’m fond of describing Virgo as seeking the perfect suitor, whether a lover or a concept.  This does not mean Virgo energy gives herself to only one person or idea, but rather that the virgoan part of us does not accept everything needlessly.  “The mind which seeks the deepest intellectual fulfillment does not give itself up to every passing idea,” as Richard Tarnas said in Cosmos and Psyche.

With the Moon and Mercury in harmonic aspect between two air signs, themes of thought, language, utility and communication carry the spirited, light and dark Hallows vibes.  What’s more, the Moon in Gemini square the Virgo stellium are all ruled by Mercury in Libra.  Libra is not just relationship in the romantic sense, but energy that seeks beauty as a principle in all its relationship to the world.  With what strategy and tact will we negotiate with the spirits of this weekend?

With all these themes culminating, let us speak on language and devotion, not only in love and relationship but in spiritualism and religiosity.

I know what people mean when they say they aren't religious, but in ways it's an amusing statement. The root of the word, 'religio', means 'to bind, reconnect, trace back.' Storytelling. Everyone does it.

Religion isn't the problem — "literalism is the enemy" as Hillman and others before him remarked. "Metaphor is myth in brief," and the objectifying, rational mind drains stories of their meaning by literalizing them. To take a symbolic narrative and get hung up on, say, something as ridiculous as the prospect of the world having actually been 'created' in seven days, is to miss the forest for the trees completely.

That is only one of many examples. Why take a beautiful pantheon of gods, and see them as a controlling hierarchy rather than shades and dimensions of human spirit?

Carl Jung, who drew up a birth chart for nearly every patient he saw, and on whose work much of modern psychology is founded, argued that the human psyche is "by nature religious." Consider that statement for just a moment. Not everyone believes in a dogma blood is shed over, but many people bring a religious attitude to relationships, to professional sports, to corporate rallies, to love of music or a given artist.

Literalism drains the suchness of meaning from lovely myths, and it paves the way for people to wield swords over other cultures like their piece of the mystery is better. The biblical scrambling of tongues, the tarot suit of swords (air, thought, language) and countless other archetypal landscapes speak to the division that occurs when language is seen as an absolute rather than a vessel.

There's nothing wrong with being religious, being devout. But there are problems with literalizing a transcendent symbol. Certainly many religions and myths point back to people and beings who actually did exist. But it doesn't -matter- whether they existed. It matters what flavors of meaning a person chooses to devote themselves to.

"Who looks outside dreams, who looks inside awakens" as Jung expressed. Going outward, the mind in pain might grasp for permanence and literalize the story. Going inward, we find the endless active images that make up the story and preempt any word for it.

Going outward, we might objectify the vessel and ignore the heart.  Going inward, we find the strength of connection and ardor aflame.