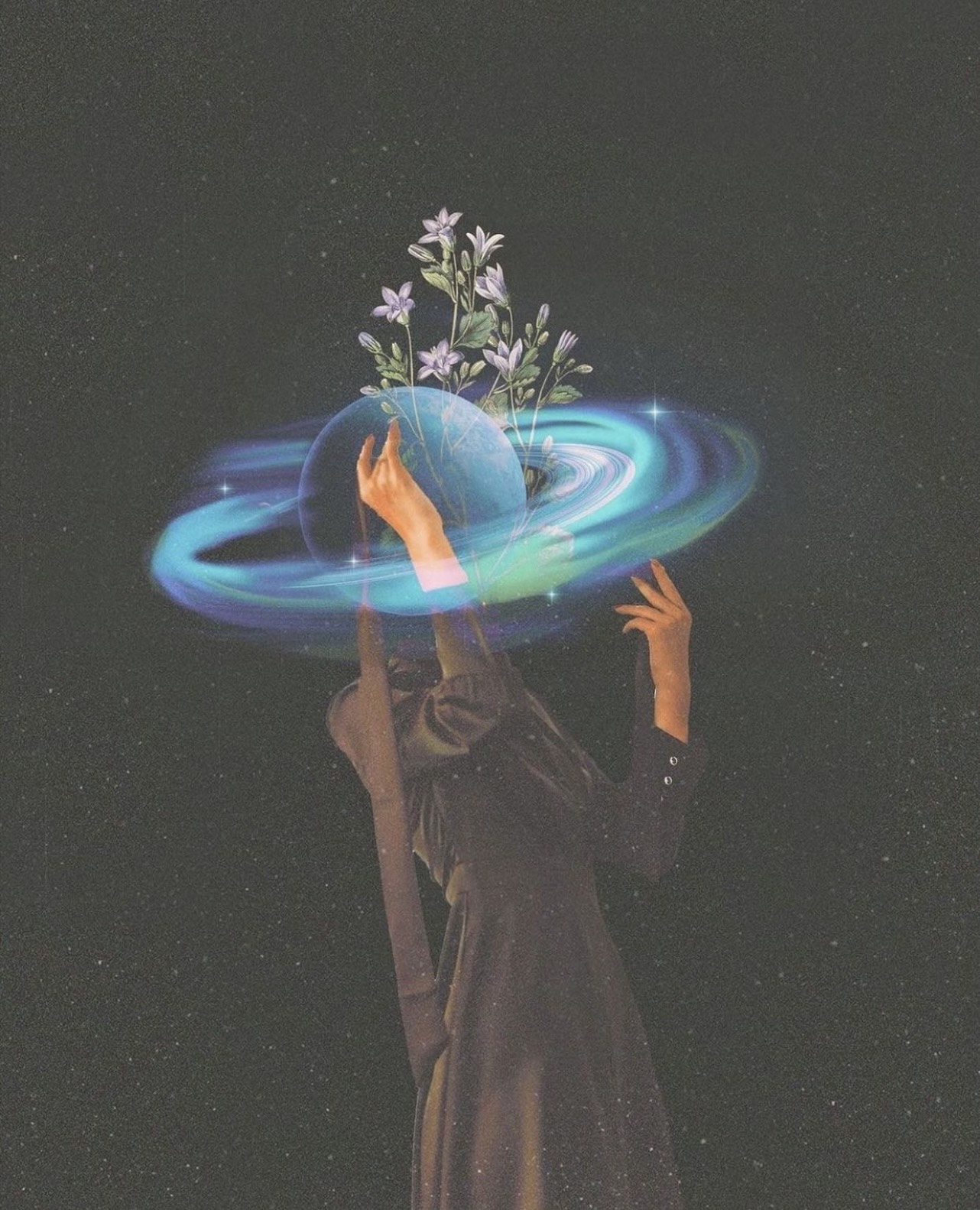 The big planet of blessings and the sea-god planet of syrupy mysticism have perfected their conjunction at 23° Pisces, as Jupiter slowly moves past Neptune.  This union is one of the biggest transits of 2022, spanning March 27th to April 29th and having exacted early in the day on April 12th.

Together these swirling giants symbolize lush inner landscapes of feeling and faith, hope and enchantment, desire and delusion.  There is abundance, imagination and fanciful indulgence, of ‘supposition or substance’ … that part of ourselves we might find intoxicated with our ideals, even full of conviction and willing to sacrifice for them.

Jupiter in its nocturnal home of Pisces blesses, protects and sensitizes.  The dignity of Jove here brings a feeling of enmeshment with the world around us, cocooning, resolving, dissolving any distance, strife — seeping through the more limiting layers of language we might encounter, mental murkiness that can divorce us from immediate experience.  “Chatter in the skull,” as Alan Watts put it.  The listening waves of Jupiter and Neptune in Pisces can help to wash this away.

Yet the lingering proximity of Mars and Saturn still conjunct in Aquarius can portend such busy circuits, as the red planet moves further through ‘the Sea’ and towards sign of the Fish.  Any Mars-Saturn meeting bears a wisdom at once zen and stoic, “the obstacle in the path becomes the path.”  The mental burdens we carry, doubts like angry birds, maybe even aquarian frames of feeling distant or ‘outside oneself’ in this or that arena… these are ‘wills o’ the wisp’ that the Pisces stellium overhead begs to relieve with its soothing synthesis and aura of acceptance.

This separating obstinance of the ‘malefic’ planets in Aquarius, and the perfection of the Star of Zeus conjunct Neptune, are in traditional aversion to each other.  Being about equally far through adjacent signs, the rays conducted by these Aquarius and Pisces conjunctions are unable to ‘see each other’ from 30° of separation along the ecliptic.  As with the other type of ‘inconjunct’ or classical aversion — the 150° minor aspect, also known as the quincunx — planets separated by either said degree range are by definition in signs of altogether different polarity (yin/yang), mode (cardinal/fixed/mutable) and element (of course, fire/earth/air/water).

So there’s a mix of productivity piercing the haze and dreamy piddling around, hard work and the vision ‘just beyond’ everyday fingertips.  We might be experiencing the capacity to receive others without compromising our own ideals — or on the other hand boundaries as diffuse as a Pisces meme with a man hammering nails into the shoreline.  We might find ourselves showing up more sensitively in situations we’re wondering whether we belong in, with Mars and Saturn still conjunct in the sign of the outsider, the exile — the ‘divine outcast,’ as I first heard Rachel Capurso put it.

While Jupiter’s diurnal home in Sagittarius carries some of the mutable fire sign’s ‘manifestinist baddy’ type fortune, Jupiter in Pisces, rather than overtly lighting the way, makes room for others to expand around us.  It is a place of radical openness, care, compassion, empathy and grace.

And yet Jupiter is still Jupiter — at times hyper-idealistic, zealous, and merrily uncompromising.  Look to the world stage, and see that war and desire are two sides of the same coin.  We all know a cheery tyrant or two, convinced of running the show for everyone sake, and one might find the same base instinct in the political despot who ‘positively’ believes they know what’s best.

While such projection can express itself through the lens of many a different planetary archetype, Jupiter in particular can be so imposing.  The singular vision too easily runs roughshod over that which does not bind to its narrative.  It can be quite a challenge to disentangle Jupiter’s strength in the sensitivity of Pisces from the blindness with which we might accept whatever reinforces our chosen story, or deny what does not fit the cup of delusion we drink from.  There is such a cup at nearly every vantage point in this existence, if we let ours be filled to violent overflow with any one perspective — to the point of not receiving another truth, or the sacred autonomy of who might profess it.

Seeking ‘the stuff’ — draining the cup so as to experience a deeper suchness of any one particular truth and witness its web of interrelationship to all other things — is a beautiful art of life.  It is part of the Work.  Yet a backdraft is ‘drinking the Kool-Aid’, an all-too-familiar Neptune trope my friend and teacher Acyuta-bhava Das is fond of using.  What Jupiter touches it expands, and this impetus to get ‘turnt’ if you will, combined with Neptune in the mix can promote living in a dream world.  As someone with a natal Sun-Neptune conjunction, I know all about the ego that can be extracted from fantasies of what one could be.  Knowing and envisioning what you already are in potentia is a drug that couch-locks many.

Neptune often has implicitly to do with surrendering egoic agency, and with the “transcendent, spiritual, ideal, symbolic, and imaginative dimensions of life; with the subtle, formless, intangible, and invisible; with the unitive, timeless, immaterial, and infinite.” (Tarnas, Cosmos and Psyche, p96).  Without using too many New Age platitudes, a crutch that can become distasteful in any modern conversation around holistic healing modalities or divinatory folk arts: this conjunction of Jupiter with Neptune in Pisces is a beautiful, hopeful jumping-off point for manifesting one’s aims, use of imagination and ‘feeling into’ what it is we’re trying to bring about.

Make no mistake, despite the potential shadows I’ve found worth in mentioning, this is a powerful and positive aspect that likely mirrors a sense of lift and ease in many lives.  Of course, the ‘constellative quality of the archetype’ (as Jung put it) is at once thematic and context specific — and different natal charts will mirror different manifestations in one’s life depending on ‘where we’re at’ and the multivalence nature of the cosmos speaks through us.

Saturn has for over four years now been transiting its home signs of Capricorn and Aquarius, and Jupiter was co-present in these for over two years until the very end of 2021.  This present conjunction of Jupiter with Neptune, as with many major aspects but especially the more discreet, undulating emanations lent by a yin sign, can have a delayed releasing in our lives as much as its beauty and optimism is felt viscerally in this very moment.  As I touched upon, the yin home of Jupiter that is Pisces holds a desire for growth, expansion — but with a sensitivity, nuance, a ‘feeling into’ rather than ‘moving above or transcending.’

A revisiting of themes to look out for, among others ~

* feeling and faith
* hope and enchantment
* dreams and delusion
* desire and disillusion
* loss and redemption
* expansion, abundance
* imagination, fanciful indulgence
* intoxication ‘with wine or worldview’
* fullness of conviction
* waking ideals and our willingness to sacrifice for them
* how sacrifice interacts with our autonomy
* weighing the emotional gravity of any deep commitment
* navigating freedom and security
* desire for growth and expansion but with sensitivity, nuance, a ‘feeling into’ rather than ‘moving above or transcending’

There is also perhaps a touch of ‘be careful what you wish for’, because you might get everything you envisioned and find yourself disillusioned with aspects of it, reflections of yourself you were yet to come to know.

The third decan of Aquarius, which Mars and Saturn presently transit, is one concerned with the nature of bonds and their (dis)entangling — and with Mars here ruling our present Aries Sun, part of the narrative concomitant with Jupiter-Neptune in Pisces is connection versus separation, immersion versus isolation.  The watery placement of this conjunction means that there will be, in some ways at least, perhaps more nuance, discretion, and a slower way of unfolding around our ideals.  “Gestating” is a key word Acyuta-bhava Das used in relation to the yin-ness of this transit, and there are things we’ve long been steeping in that will reach a ripeness inside and through the rays of this momentous meeting.

Elodie St. Onge-Aubut, among others in swirling piscean recognition have pointed out how wonderfully tactile it is, that the exacting Jupiter-Neptune in Pisces has been ushered in by Mercury newly into Taurus, and the Moon flitting through Virgo and opposing, yet together grounding this conjunction — clarifying dreams, ideals, delusions, and letting amorous enchantment with existence be seen and felt for what it is.