Novel: The Spread in Aquarius 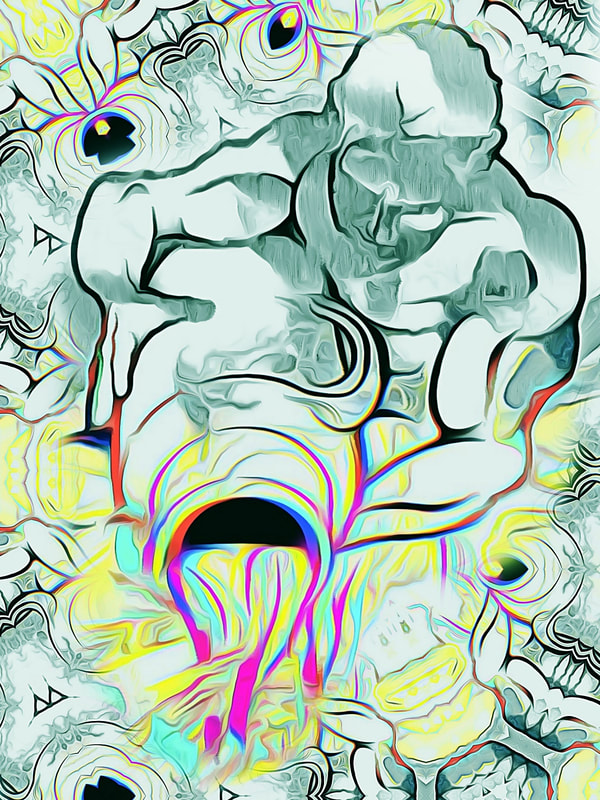 The remarkable stellium — that is, three or more planets — currently in the sign of The Water Bearer is an electrifying spread, and one slightly prone to a seesaw of building or zapping momentum throughout this day and night.

Mercury is retrograde until the 20th, and Venus’ conjunction with Jupiter builds connection in the midst of isolation. This week through its end beckon 'knower of the proper time' for both solitude and for reaching out.

As some will know, the watery motifs shared by the signs of Capricorn ‘The Sea Goat’, Aquarius ‘The Water Bearer’ and Pisces ‘The Fish’ have to do with their namesake constellations dwelling in a part of the sky classically called ‘The Sea.’ By mode and element, however, Aquarius is the ‘fixed air’ sign and one of a yang persuasion.

Air signs are a topic you may have heard a bit more about leading up to and since this past solstice and its Great Conjunction. The classical element of Air has to do with thought, language, utility, communication, relational exchanges and social structures, among other things. The beauty of mental circuitry and metropolitan bounce.

By utility, the word above I’m more personally fond of associating with Air, I mean not just the physical use of something, but the idea of its use or role in the practical and structural sense. The idea of something, not only the thing in itself — and while this is not to strip Air of its visionary attributes, I mean ‘the idea of something’ in a more straightforward and less imaginal way.

“Just as language has no longer anything in common with the thing it names, so the movements of the people who live in cities have lost their connection with the earth; they hang, as it were, in the air, hover in all directions, and find no place where they can settle.”

One of the shadows of Air is to like the idea of something more than one actually likes it. A new conversation, a new lover, a new product, to replace something that isn’t broken perhaps. The novelty-seeking quality of the Air is probably associated most strongly with Aquarius.

To be possessed by our word for something more than we are present with the boundless nature of what we’re naming, to be electrified by defining the boundaries of the creations we bring to life like a mad professor, is not unlike the way in which Aquarius’ rulership by boundary-namer Saturn and their natural opposition to Leo and the Sun.

Air signs naturally ‘oppose’ fire signs, and despite sharing an active, ‘yang’ polarity, the winds of the mind, whether they unite or divide, are different than the fiery action they dialogue with.

Fire evokes the ‘singular’ vision, the suchness of meaning before subordination to words, and the externalization of these by an act of will.

Air evokes thought and the consideration of multiple paths; distance and objectivity; and the cultural ‘little-l logos’ / words we subordinate our realities to.

From the Dao to The Book of Thoth, one can find motifs wherein questions of ‘virtue’ and honorable action are threatened by sorrow of mental anguish, or the singularity of will is diffused by novelty-seeking and choice paralysis. The dissipating shadow of Air is real as the tyranny of Fire.

Beyond these works, we hear of scrambled tongues, toppling towers, and lyrics of everyone talking and no one listening. In his notes on the I Ching, Ira Progoff wrote, “The wind drives things about, breaking apart what has previously been united.” Such is the power of Swords, the tarot suit corresponding to the classical element of Air which far predates it.

Air, language and thought are powerful — and their dualistic tendencies can mirror the division born of a blade. We must wield Air with kindness and tenderness, for wholeness and humanitarian purposes rather than carving out withered and isolated spaces.

Minds are not just for emptying of thoughts through this yoga or that meditation; the work is to stay present so that the most suitable thoughts arrive, the ones which provide the greatest utility to our present needs in communicating with each other, balancing each other, fortifying each other again and again.

Modern day New Age McMemes speak with fisher price profundity of how the ego second-guesses what intuition already knows. It’s often true, but yet again, one finds a sort of monotheistic, solar bent ringing out perhaps too loud in the spiritualist patchwork quilt. I’ve named some of its core shadows, but at the same time, why all the flack for Air?

It’s true, Air is sometimes associated with ego in the sense of language-based concept of oneself. But ego is utility, and there can be little useful action in social exchanges, relationships, society — without thinking, without idea of selfhood, without proper utilization of the thoughts we can never quite empty our heads of… without the drawing and pushing of boundaries inherent to our flawed relational dances, tangled in webs of words, sung in both victory and melancholic brokenness.

There is a divinity in solitude, even when you’re desired. There is some decisiveness in devolution, and it is an acceptable part of the story.

To know how something works from the inside out, to see the triumph in the antihero, to see the outcast, the iconoclast, the pariah, and say, ‘hey, that’s okay, you’re not so separate, are you’ and reel them in — these are some of the divinities of Aquarius.