October and the Spectral Stay of Execution 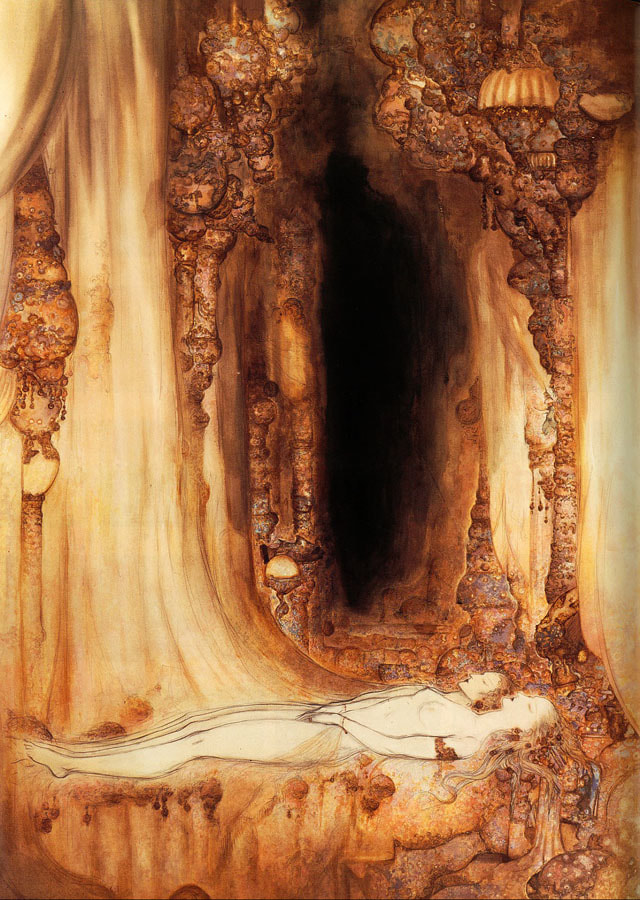 The Sun has entered Scorpio, the fixed water sign, ‘feminine’ (yin) in polarity, and the nocturnal house of Mars.  Our social technologies rattle with memetic calls from pop gurus for the uniting of covens, black-adorned masses and sacrifices of the patriarchy.

Valid both in principle and as half-tongue-in-cheek branding, one might still find these flavors of expression a tad pulpy in their noir-ishness, a slash(er) in the side of stale structures, grimoires as gimlets and a pinch of the inevitable kitsch.

And if that sounds a bit like astro trend aesthetic of the past three years in particular as much as wearing the lens of Scorpio season now, you’re not wrong.  The rattling western walls are interwoven with themes in the psyche and soul of those bringing the old ‘new’ with big disruption.  The aesthetic dimensions of belief are quite something.  Yet pop culture’s ‘frothing to the top’ from deep currents of cultivated taste, rooted in lineages of ritual and healing arts, while a pleasant foam, will not quite do astrological traditions aesthetic or imaginal justice.

So these true flavors of the meme’d zodiacal month are another flicker from the spirit of the times, scorpionic in color cloak for this seasonal arc of another revolution on Earth.  ‘Scorpio season 2020’ begins with a square to the Moon in Aquarius, the ‘loosing of the bond.’  The fire-water of Scorpio, however, beckons the urge to merge, and no matter this opening lunation, one might find a more decided momentum in the coming days than had visited previously this month, Mercury and Mars retrogrades notwithstanding.

A political climate, if you will indulge: One staccato-sentence of looming dementia feigns ‘Mars in Scorpio control’ from a debate pulpit, definitely six feet away from the gilded orange implosion with Mars in Leo, who billows only wishing to captivate the somehow many… perhaps like only someone born the same year as Ted Bundy with their rising sign to almost the same degree (near Regulus) could.

Not the most nuanced point of comparison for the POTUS and Bundy, so far as doing justice to astrology goes.  But see how much less ridiculous that sounds now than it would have even just a year ago?  And here we are.

So while the Moon in Aquarius waxes from its first quarter square to the Sun in Mars’ nocturnal home, this loosing of the bond might strike a desire to disassociate from the fire-water of our circumstances, individual or collective.  Best to steady it early; and trust the momentum will continue to build, whether working in stealth or overground to metamorphosize, to usher in the new, the old, what is due to disrupt.

If dynamics in the collective appear to remain stale across the coming days, all but a stay of execution seems to me a more proper mortal approximation of that which will be granted those upholding the walls rattled.

Mercury's retrograde takes the messenger planet from its passage into Scorpio's investigative waters and tunneling back into Libra, before resuming 'forward motion' on November 4th.  The Sun's traverse of Mars's nocturnal Scorpio is indeed affected by the red planet's enduring retrograde in its other home of Aries, going direct on the 14th.

In my writing on the astrology of this past September, I focused on the Mars-Saturn squares and the New Moon in Virgo, with hints of Libra’s cardinality playing into Mars in Aries and Saturn in Capricorn.  I plan to weigh in on these dynamics upon Venus’ entrance into Libra in the coming days.  And as Scorpio season deepens, I will comment further on the fire-water, with a list of important dates for best seducing these energies known as much to ensnare.