Planetary Portraits - The Astrology of André 3000 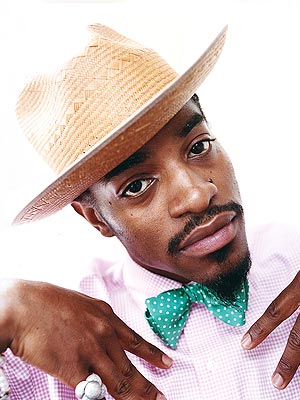 Air sign influence tends to do tragedy differently, be it role reversal, character defeat, the antihero, you name it.  For each day of the year, I can usually name a few friends, acquaintances or cultural figures born that day, and today the rapper André 3000 (born May 27th, 1975) popped into my head as a perfect example of the archetype of Gemini — and tragicomedy, as sort of mercurial dualisms go.  Think Melpomene and Thalia, the 'happy and sad face masks' or 'theater masks' as they're sometimes called.

Nearly every major OutKast hit is lyrically sorrowful and set to a ridiculously funky tune that comes off uplifting in nature, but with twangs of pain layered in.  The contrast is always stunning, and one might be surprised to consider just how many of their singles, varied brilliance though they are, evidence this similar kind of genius contrast.  Just a few examples working backwards: "Hey Ya!" (see all of its sad acoustic YouTube covers from way back), "Ms. Jackson" (largely inspired by André's relationship with Erykah Badu and her mother), "B.O.B. (Bombs Over Baghdad)", and one of my personal favorite songs of all time, "Elevators (Me and You)", whose lyrics are so cleverly profound as to go over even the savviest of heads, especially at the end.

This isn't getting so much into chart specifics as it is "the constellative quality of the archetype," as Jung put it, but these kinds of exercises are helpful in seeing the archetypal at work in the brilliance of particular humans.  Of course, the other half of OutKast, Big Boi, is an Aquarius — the airy duo’s flits and flows resulted in the victory of an album in 1998, Aquemini. Between this, a number of lyrics and former partner Erykah Badu's immersion in many things mysticism, folk art and holistic healing, André's facility in the way of astrological symbolism is more than suggested.

Here's an excerpt from Three Stacks' interview with Rolling Stone this past December:

"I haven’t been making much music, man. My focus is not there.  My confidence is not there," he said.  "I tinker a lot. I’ll just go to a piano and sit my iPhone down and just record what I’m doing.  Move my fingers around and whatever happens, but I haven’t been motivated to do a serious project.  I’d like to, but it’s just not coming.  In my own self I’m trying to figure out where do I sit?  I don’t even know what I am and maybe I’m nothing.  Maybe I’m not supposed to be anything.  Maybe my history is kind of handicapping in a way."

Later, André shared that the constant dissection of his music and hyperbolic critical analysis of his every move is one of the reasons he’s abstained from releasing a larger body of work outside of his occasional features.  "Any little thing I put out, it’s instantly attacked, not in a good or bad way," he continued.  "People nitpick it with a fine-tooth comb.  ‘Oh, he said that word!’  And that’s not a great place to create from and it makes you draw back.  Maybe I don’t have the confidence that I want, or the space to experiment like I used to.”

All of these dynamics are relevant to Mercury's domicile in both Gemini and Virgo, and the natural opposition of these to the Jupiter-ruled signs of Sagittarius and Pisces.  While the Jupiter parts of us tend to be expansive and affirming, ruling curves and encompassing belief, the Mercury shades of psyche tend to be more critico-rational, ruling angles and skepticism, poking holes in what they might see as jovian loftiness.

Whether 3000's musical career is truly over or not, the man has left us with many things to celebrate, which also happens to be the message championed from the title of the article quoted onward.  Radio edit aside, below is the video for one of my favorite OutKast tunes, a classic sing-along hip hop joint still undeniably morose in aspects of its tone.