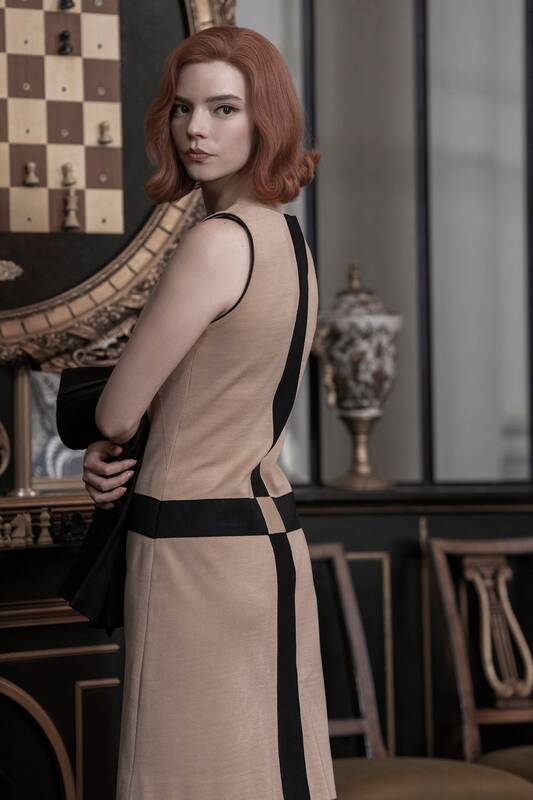 ​The Queen’s Gambit is such a lovely piece of art. I like how the character development wasn’t forced, if even advanced much at all in some of the side roles. Helped to give it that ‘slice of life’ quality, which in tandem with the show’s short run contributed to the humanness of each portrayal. Rather than leap characters along, they were seen in contrasting moments which, even when brief, revealed their pleasant nuances — and virtue as people.

Early in watching, I almost felt guilty expecting Elizabeth Harmon (Anya Taylor-Joy) to be dealt additional trial and obstacles, but quickly came to recognize when the writers would make a point of things in her life happening more on her terms — as they should, but also as a narrative counterpoint to her coming from being orphaned.

Beth’s adoptive mother Alma Wheatley (Marielle Heller) is someone whose initial indifference about chess is used by the show to make one almost expect she might finesse Beth’s tournament winnings, but along their travels she asks for a small percentage — less than what Beth was already prepared to give her. Elizabeth Harmon’s sovereignty is respected at nearly every turn.

I must say, in all Beth’s captivating coolness and Alma’s boozy escapades, I feel like I detected just a bit of The Hustler’s bar and hotel scenes with Paul Newman and Piper Laurie, George C. Scott and so on. Perhaps more so The Color of Money.

Various male characters in The Queen’s Gambit — Benny Watts (Thomas Brodie-Sangster), Harry Beltik (Harry Melling), Townes (Jacob Fortune-Lloyd) — who had real attraction to / flings with Beth, showed themselves as people who still wanted what was best for her regardless of history or physical desire — letting such things fade from view in their emotional support and gunning for her victories. Also decidedly on point, given times of poisonous patriarchal type entitlement.

I definitely cried when Beth visited the orphanage as an adult and saw those newspaper clippings in the basement. 💧 Stuff like that gets me, but I’m a total pushover when it comes to film as a medium in the first place. And music... and... art is a time to surrender, to not be in control, imo.

Her revisiting the basement had dimensions, though. You almost want Beth to have reached out to Mr. Shaibel (Bill Camp), to have maintained the relationship, but things happen as they do. Beth’s mix of passion and stoicism is born in part of the dramatic yet hardening nature of her separation from family — and you can picture Mr. Shaibel silently understanding, holding their bond to his death regardless of whether contact was sustained. A psychic bond. Plus, Beth was certainly the ever busy young woman.

Some of my absolute favorite moments of the series were Alma’s piano-playing — first her solace in Erik Satie’s “Gymnopedie No. 1” — which came to a glorious climax as she performed Mascagni’s “Son pochi fiori” for a sprawl of people in the lounge of a Mexico hotel. This series really flowed like a long film.

I was unfamiliar with Anya Taylor-Joy before watching The Queen’s Gambit, but pretty soon after starting the show thought to myself, “Her gaze reminds me a bit of Emma Watson’s in just a few press shoots.” Turns out their birthdays are a day apart (different years). What’s in a solar degree, right~?

Anyway... bravo to the cast, crew, writers and all involved in The Queen’s Gambit. It’s curious, I was listening to quite a bit of Satie in the weeks prior to watching over the past couple nights. Often during or between watching frames of live snooker tournaments, which are like chess on an oversized pool table. Something in the air~ ☿ ♄

As for Anya Taylor-Joy’s astrological power at a glance, wrapping on the note of an actress tapping into untold influence on theatric screens… the boldness of a double Aries, no matter the shades of stoicism in a role, shines through in her type of fearlessness — not in recreating her life so much as creating it for the first time. Those childlike steps by her own will — from a prodigal womb’s roar to the warrior's in her own.

Without a public birth time or one colloquially known and made public, we cannot know Taylor-Joy’s rising sign or her natal planets’ house placements. Though the degree range of her Moon places it in Aries no matter the time of day, it seems we also cannot know whether Taylor-Joy is a dark moon birth or a new moon birth — although the former is much more likely, as things stand.

Venus in Gemini, also Anya’s natally, belongs to the rulership of Mercury, as Gemini is Mercury’s diurnal home. Venus here guests in Mercury’s house, which brings to her a curiosity in art and relations, a versatility of roles, and perhaps a penchant for multiple lovers. Mercury’s homes of Gemini and Virgo both lend themselves to the ‘angle eye’ — a fact which in its instinctual reality would not be lost on the pool-hustling prowess of Queen’s Gambit author Walter Tavis.

In chess, we see this expressed in being able to see multiple moves ahead of the opponent, in mercurial multiples of different possible outcomes. Like the drug-affected dreams of young Beth, bent toward pushing the boundaries of orphanage externals, we see the intellect’s curious ferocity and a heart kept warrior cool. These are just a few ways, of the many ways Mercury sees. ☿