Pride and Ambition, Hubris and Humility 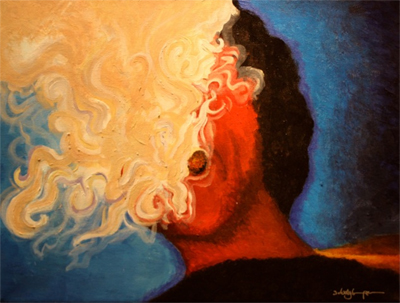 The Moon has entered Scorpio in its passage via combusta, squaring Mars in Leo on this evening of August 20th.  A contentious situation might arise, but yield to resolution with the Moon’s trine to Neptune in Pisces soon thereafter.  Meanwhile the Sun is in the last few days of its domicile Leo, and will conjoin Jupiter in Virgo a week from today.  Venus continues her illusion of backward movement through the Lion, where she will conjoin Mars on the last day of August.  Let us stage a dance between the Leo and Virgo energy searing down, amidst the endless cast of images conjured by our present sky…

The varying seasons of Earth partake of a magnificent breath.  Spring is an inhalation, summer the full lungs.  Fall an exhalation, winter the empty lungs.  In this motion our energy moves.

Fire and Air are up!  The nourishing rays of our Sun, the winds which carry thoughts and seeds.  Water and Earth are down… the soil beneath us and the matrix of water that sustains all life.

In another view of the cross, Fire and Water are in, Earth and Air out.

Fire, the suchness of inner vision, the power of will projected outward.  Water, the depth of feeling, one’s gravitation toward events in the external.

Earth, the blessing of material incarnation, bringing physical pleasure in this sense-perceptible world.  Air, the utility and application of our visions, the thoughts that move through the air into our minds, out through our tongues.

In this way, it is natural law that the cardinal fire sign of Aries instigates spring and the cardinal water sign Cancer instigates summer.  Fire and Water rule the seasons of inhalation and full lungs… energy drawn in towards the self.

Cancer, the first water sign of the zodiac, and following her Leo, the second fire sign, are these moments the year’s lungs are fullest.  Surely enough, in the northern hemisphere light is at its peak June 21st and begins to wane… the exaltation of life, yet Cancer’s special relationship to home, roots, death, and those dark inner nooks of the soul… Leo, the center of the held breath, its chest puffed out, a pride of lions called such for a reason.

Leo has long been considered to rule the heart and spine, and is that not where the breath is held at the Lon’s stretch of the year’s inhalation and exhalation?  It descends to the stomach with Virgo’s rulership thereof, before Libra instigates the exhalation of autumn.

The astrologer and esotericist Austin Coppock wrote that “ambition must be distilled from hubris over and over again to achieve purity of purpose.”  With pride, whose vulgar extremity is hubris, we might envision the subjective internality of emotion and will, of water and fire.  There is personal sanctity in Cancer’s dark nooks of the soul, in Leo’s proud strut — a cat filled up with the light it basks in, knowing the regality of its own being, a fact of its existence simply built in.  There is a part of us that is ‘the shit’ without trying.  The magic of being alive and willful.

Yet in some strata of life, it is not enough only to radiate one’s innate self.  The ferocity of spirit might seem like the truest royalty, a birthright of every incarnate being, but the personal kingdom endowed to each person who lives their creative path requires effort in the world ‘out there.’  The path that is ‘walked or named’ might not be the Tao, but it takes walking and talking to prove it.

This is where Saturn’s rulership of Capricorn and Aquarius, polar signs to Cancer and Leo, makes itself clear.  The internality of watery feeling and fiery will is formless without the bedrock of earthy embodiment and its utility in air’s genius.  The radiance of pride — seductive yet all too often unconscious of the will’s implicit tyranny — is distilled into ambition.  Expression of manifest purpose in the external world.

The crab and lion sing sweet primordial symphonies we are born living.  Perhaps the goat and water bearer cradle this divinity, one and the same with it.  They are both the throne and our disengagement from the chiseled steps which lead to the foot of it.  Our walk along the worn path and the moment we diverge from it.  The ruler and the rebel.

The cardinal Air and Earth signs, Libra and Capricorn, instigate fall and winter.  They are the exhalation and empty lungs, as energy has been expelled outwards toward social and worldly concerns.  The manifestation of self in the world ‘out there’ — with Virgo stretching between Leo and Libra, between full lungs and exhalation.  Virgo, the harvest maiden who sits at the boundary of self and other.

How best do we honor our own being while still blessing those close?  When to give and when to withhold?  To balance the grand gesture with prudence and discretion… Do we create an equally real type of personal sanctity when we set ablaze the limits of our comfort zones?

The Sun will conjoin Jupiter in Virgo on August 27th, followed by the Full Moon in Pisces on the 29th.  And on the 31st as we said, Mars and Venus meet at 15° Leo.  While the former conjunction suggests a possibility of expansion toward prudent courses of action, the Mars-Venus conjunction in Leo decan II — “A Crown of Laurels” as Coppock called it — may very well bring the last exaltation of this summer’s most incendiary flares.  These might take the form of romantic fervor, or the manifestation of a creative vision in a suitable vessel.  I will close with some of Coppock’s words on "A Crown of Laurels"…