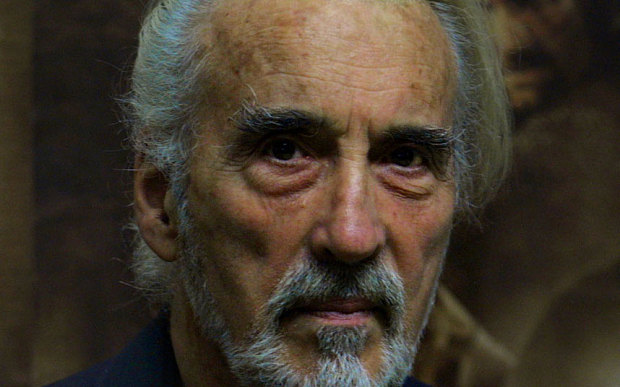 June 7th marked the passing of a giant.  Sir Christopher Lee reached his 93rd lap around the sun not two weeks before his death.  I would like to speak on aspects of his life, as well as their relationship to larger patterns which glorify him as an individual as much as they do what is macrocosmic.

“Sir Christopher Lee, the actor, who has died aged 93, defined the macabre for a generation of horror film enthusiasts with his chilling portrayals of Count Dracula; in a career that spanned more than half a century Lee played the sinister vampire no fewer than nine times in productions including Dracula (1958), Dracula: Prince of Darkness (1966) and The Satanic Rites of Dracula (1973).

After decades in the film industry, Lee remained as eager as ever to take on new roles. In 1990 at the age of 71 (and having undergone open heart surgery) he appeared in 12 different films within 14 months. 'I get restless and frustrated if I don’t work,' he insisted, 'I like a continual challenge.' In his eighties he gained a new audience, bringing sulphurous intensity to the role of Saruman in Peter Jackson’s epic Lord of the Rings films.”

The versatility and restlessness of the Gemini-Sagittarius axis comes through clearly in Lee’s words.  He was born with Mars retrograde in Sagittarius in the 3rd house, opposing a Gemini stellium of the Sun, Moon and Mercury in the 9th.

Surely enough, his busy vision and multi-talented pursuits eventually went the direction of theater… “After the war, Lee served with the Central Registry of War Crimes, work that took him to concentration camps including Dachau, but when he was demobbed at the age of 24, he remained undecided about which career to pursue. He toyed with the idea of becoming a ballet dancer, opera singer and diplomat before his cousin (at that time the Italian ambassador to the Court of St James) suggested he try acting.”

While fire is the archetypal ‘active image’ and the instinct to ‘play', air is like the role itself — forms taking the active body to interactive context, not unlike the theatrics of Lee’s Libra ascendant.  Gemini is the essential quirk of identity and role-playing, the comedy and tragedy masks, the multiplicity of life’s characters and all the mirrors in between them.  With his Gemini stellium in the sagittarian 9th house, to adapt roles was perhaps a spiritual sojourn for Sir Christopher Lee.  In his own words, "Making films has never just been a job to me, it is my life. I have some interests outside of acting – I sing and I’ve written books, for instance – but acting is what keeps me going, it’s what I do, it gives life purpose.”

Gemini’s busyness and adaptivity as a mutable sign is of curious importance in the world of acting.  Johnny Depp, a June 9th Gemini legendary for his flexibility, is often the highest paid actor in Hollywood.  Beyond preeminent, Sir Christopher Lee set the record for more screen credits than any other performer — reportedly 275.  A truly mercurial wizard... with a soulful  Venus-Pluto conjunction in Cancer at the midheaven, to buttress fruitfulness with imagination.