Transformation Amongst the Gods 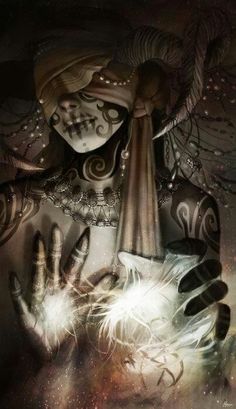 What relationships to create?  What new world to innovate?  What fights to pick and peace to let satiate?

The Sun is twenty-five degrees through Aquarius, the Water Bearer — about halfway through its third and last decan.  Called “Unstable Effort” in the Golden Dawn’s Book T, and “Futility” in Aleister Crowley’s Book of Thoth, this decan conjures the question of whether or not to abandon a situation.

In his book 36 Faces, the astrologer and esotericist Austin Coppock named this decan “The Knot.”  He describes “the Seven of Swords, which represents this decan in the Rider Waite Tarot.  On this card a sly man sneaks away from an encampment, carrying five swords while two other blades lie abandoned […] Yet the man’s escape disguises the struggle which this face entails, for it is not a simple severance.  The swords the figure absconds with suggest that he has not left penniless, but has instead paused to collect what is of value before departing.”

Early in the Sun’s passage through Aquarius this time around, I referred to some fundamentals of this sign: “fixed air, focused thought, the revolutionary, the universalist.”  Here I will draw attention to the ‘innovator’ archetype, which shows up in everything from aquarian flavors of musical prowess and love of technology, to the “growing disgust with the state of things” Coppock further describes “The Knot” as expressing.

At the moment, our Aquarius Sun squares Mars in Scorpio, as well as the Moon’s exaltation in Taurus.  The Moon-Mars opposition highlights a tension between Eden’s peace-seeking and brooding, volcanic drama, while the solar Aquarian qualities would like to envision a better world and relational network from a more detached, less emotionally charged standpoint.

The astrologer Eric Coppolino refers to Aquarius as the sign of “innovation that works,” and the square between this Sun sign and Mars in Scorpio suggests a question of what kind of new world (Aquarius) we would like to transform (Scorpio) from our current state of being.  The relative proximity of Venus and Pluto in Capricorn also refers to the cathartic rebirthing of relationships and comfort zones.  Are you feeling discontent in any one of your relationships or social collaborations?  Is the bullshit worth complaining about?  Might it even be worth jumping ship without expending energy on a complaint over nothing ultimately ‘worth it’?

This momentary, Moon-activated t-square could manifest in a number of ways:

* the desire to cast light on darkness (Scorpio) in a relationship or collective vision (Venus in Capricorn, Sun in Aquarius) is met by a mitigating, passing harmony of the day (Moon in Taurus)

* a way of viewing one’s social groups, collective dreams and visions (Aquarius) is challenged by subterranean doubts and criticisms (Scorpio)

* the need for change or a new rendering of society (Aquarius) is met by a hot, bubbling, cathartic anger (Scorpio), not to mention a smattering of witty and scathing political memes — re: political climate of recent months, Sanders vs. Clinton

* the desire for peace and some semblance of harmony is met by the crowds who most steadily have your back; respite is found (Venus in Capricorn trine to Jupiter in Virgo)

Some of this will ring true for anyone, whereas some of it particularly reflects my interesting Valentine’s Day experiences.  I had quite a lovely romantic Saturday night into Sunday morning, while Sunday evening yielded another couple moments of my life at gunpoint.  Unrelated to any romance.  I still won.  Maybe your weekend was interesting too?

Another dynamic highlighted in this t-square could be looked at in a very transpersonal, generational manner.  Occasionally I wonder about the future lengths of time when Uranus in Taurus and Pluto in Aquarius will interact, what aspects might be made with their varying stays in these signs.

Will the visceral, primal rebellion and revolution of Uranus in Aries these past years — with Syria, with Lebanon, with the Middle East on whole, with Occupy, with Paris, and with so much vehemence for social justice — give way to the groundbreaking leaps and hurdles (Uranus) for a step-by-step, roots and solutions laid (Taurus) way of soothing the needed tension?

Will the tombstone decay of aging, impressively resistant structures which served in their cradling, meet the rebirth they always craved to match them (Pluto in Capricorn meets Aquarius sometime?)

May your aquarian hopes, dreams and wishes, be met by a transformative, scorpion pull… and push, toward your vision for a world of abundance and nurture — in the most immediate loving relationships, and collective visions for this world.